Bending your frequencies – a customer view of the Bellari 570 EQ

Always fun to get opinions like this from customers! This article is from one of our regulars, Jim M. who has worked with us to build a great system in his home. Hope you enjoy his insights on the new Bellari 570. Without further ado…

Picture the scene.  Joel’s dad walks Joel from the kitchen to the formal living room where Dad’s stereo resides.

Joel’s Father : Joel, do you hear something odd? Something unpleasant?

Joel’s Father : Is this the way I left the equalizer?

Joel’s Father : No. This is not some toy for you and your friends. If you can’t use it properly, you’re not to use it at all. My house, my rules.

(From the movie “Risky Business”.)

Once upon a time a graphic equalizer was a perfectly acceptable accessory in an audiophile’s system, used to balance the frequencies to suit a room’s acoustics or the listener’s preference.  In the early 1970s my dad purchased a receiver that sustained our family into the late 1980s.  The receiver was a JVC, 5003-W.  It cranked out 70 watts per channel and featured a built in “Sound Effect Amplifier” (SEA).  Purchased at Clark Air Force Base in the Philippines, it was considered state of the art.  Just like Joel, this was “not some toy for you and your friends.”  As a pre-teen, I remember reading the owner’s manual and learning how to adjust the frequencies and the advantages of SEA compared to just bass and treble controls.  This ability to control the high, low, and everything in between frequencies was lots of fun for a teenage boy blasting Led Zeppelin or Van Halen.  Eventually I grew up, saved some money and went to college.  It was time to blow my summer earnings on a stereo to take to school.  Of course, there was no way that my system would not have an equalizer, after all it was the mid-eighties.  Just like my father, I purchased a JVC.  To this day it still works.  I listen to it daily in my bedroom, and of course the built-in equalizer continues the original SEA branding.

Now, the feelings among audiophiles towards equalizers has changed.  Audiophiles’ current paradigm regarding equalizers is that equalizers are taboo.  Their thought believes that the recorded music should be played as the sound engineers, producers, musicians, and anyone else involved with the recording process intended.  Listeners are not capable of determining the sonic balance of their own preference.  Equalizers should not be used to correct short comings of the recording.  If the thumbing bass is not to your tastes, too bad.  Want to boost the ride cymbal, cannot have it.  The war against equalization has gone so far that some high-end systems do not even have bass and treble controls.  I do not understand their feelings. It is not like painting a mustache on the Mona Lisa.  If you want to listen to the music as it was recorded, simply turn off the equalizer.  Luckily my Parasound system at least has bass and treble controls.  Still I missed the control of an old school equalizer.  Then I stumbled upon the Bellari EQ570 for sale at Rich’s Record Emporium.

While attending Rich’s Record Store Day, they requested I borrow the EQ570 to write review.  I welcomed the offer and even bought a couple of records. I began my review with some research.  First, I found the owner’s manual for my dad’s old JVC receiver.  I then I looked up frequencies of a few instruments.  Then I contacted the nice people at Parasound to learn what frequencies their bass and treble controls effect.  Then I auditioned the Bellari EQ570.  Here is what I found.

I connected the Bellari EQ570 in between the Parasound pre-amplifier and amplifier and spun one of my newest records, “Allman Brothers At Fillmore East”.  Of course, I did my best to use the scientific method when possible and be unbiased.  Carefully I listened to each song with and without equalization.  Time after time after time, I kept coming back to the songs sound better with a little boost in the high frequencies.  This was the case regardless of the music source, vinyl, CD or even the radio.  It also held true whether I was listening indoors or to the outdoor speakers.  Another variable was the style of music.  I played a little bit of everything, rock, jazz and big band.  Once I even accidentally gave myself a double-blind test.  I put some music on and was not ecstatic about the sound.  Then I realized the equalizer was not turned on.

On the Bellariaudio.com website is the following quote, “Not all records sound great, some of the “new” recordings lack dynamic range and seem overly compressed. Why suffer from glaring treble or poor bass response due to a bad recording? It’s silly to suffer through bad recordings for the sake of “purity.” There’s no reason EQ controls can’t be implemented and used in ways that result in a net sonic improvement, and of course they can always be bypassed when a great recording is being played.”  I found this to be true.  Another Record Store Day acquisition was “Sunrise on the Blues”.  I felt there was something missing listening to Howlin Wolf’s “Everbody’s in the Mood”.  The ride cymbal was just a little soft.  I gave a little boost at 7500Hz and everything was right in the world.

The results.  I bought it and have never been happier.  The Bellari EQ570 is a reasonably priced (go to Rich’s) 4 band equalizer with controls at 60Hz, 400Hz, 2000Hz and 7500Hz.  Its bright red case with gold colored control knobs is only about 1.25”x 5.5”x 3”, is easy to integrate with your existing system.   With my system’s bass and treble controls, it is like having a 6-band equalizer.  Also, I believe that there is not a lot of music to be adjusted at 10kHz, so the 7500Hz fills in quite nicely.   There are a few drawbacks.  There are no visible lines on the control knobs indicating how much is added or subtracted at each frequency.  It lacks a remote control.  The most annoying drawback is the popping noise it makes when you turn it on or use the bypass button.

Bellari Audio is an American company established in 1989.  Their products are handmade in Salt Lake City Utah.

In conclusion, the equalizer is a toy for me and my friends. My house, my rules. 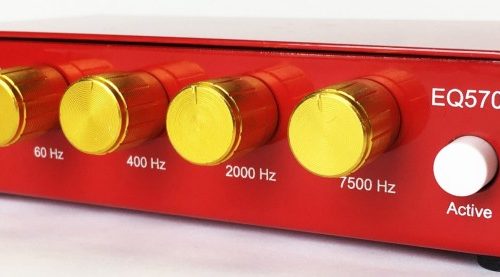 Why Vinyl?
So why vinyl, anyway? by: Tim   Music is good for you. Listening to music releases endorphins, dopamine, and serotonin, the “feel good” hormones in …
Read more